Consent has become a buzzword over the last few years. With the #MeToo movement and the many high-profile sexual assault trials making headlines, it’s important to have a frank conversation that both defines and discusses sexual consent.

The dictionary definition of consent says, “permission for something to happen or an agreement to do something.” This seems pretty cut and dry – but why is it that SO many people still seem to misunderstand what consent is?


Think about it. How many times have you heard about a woman reporting she was sexually assaulted during a college party only to have people respond with, “Well she shouldn’t be drinking that much.” Or, “She sleeps with everyone, I think she just wants a payout.” Not only are these words incredibly damaging and insensitive, they're also misinformed.


Approximately 30% of rape cases are reported to the police and of that 30% only about .08% of perpetrators will go to jail or prison. One of the main reasons reporting is so low is due to the societal backlash many sexual assault victims face, leaving them feeling ostrcized, ashamed and fearful that their attacker may retaliate. 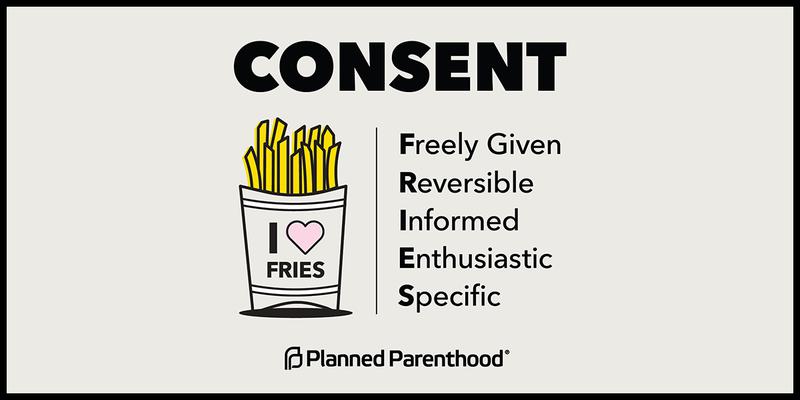 How to ask for sexual consent

If your partner says “yes” or makes it clear that they’re into it, then you have consent.

If your partner says, “no” or says nothing at all, you don’t have consent. Also, pay attention to your partners’ tone of voice and body language. If they seem hesitant or uncomfortable then you DO NOT have consent.

If you don’t know what they want, or they say yes but don’t seem sure, stop what you’re doing and check in with them before you keep going. Try saying something like:

If your partner says “yes” to something but you’re not sure they mean it, your best bet is to NOT do that thing and talk about it later. Oftentimes, this situation happens in the middle of having sex, which can make your partner feel pressured, embarrassed or guilty about setting boundaries.

Talk about new things you want to try in the bedroom in a neutral environment instead of in the heat of the moment – and you should plan out a time to have that conversation. Don’t just bring it up out of nowhere. Say something like, “I’d really like to reconnect about our sex-life. Are you comfortable with having that conversation after dinner tonight?”

How to say ‘no’ if you’re uncomfortable

On the flip-side, if you’re the one wanting to say no but you feel pressured, uncomfortable or just have a hard time being assertive, try following these tips:

Keep in mind, you don’t owe any explanation to your partner. You don’t need to justify why you’re saying no if you’re uncomfortable doing so. Listen to what your body is telling you. Sometimes we want to please others so badly we ignore our gut feelings.

If you start to feel anxious, scared or just uncomfortable in any way, your body may be telling you something – listen to it. If you feel as if you’re dissociating (for example, you ‘zone out’ while engaging in sex) this is a trauma response and is another way your body/mind is communicating that you’re not in the right headspace to move forward.

It’s extremely important to keep in mind what sexual consen’t does not look like. It’s not always as black and white as someone saying ‘no.’ Here are some examples:

Alcohol and many drugs can affect three things: your inhibitions, your thought processing, and your ability to communicate clearly and quickly. Plus, if someone has overindulged, there’s the risk that they could be unconscious or unresponsive. If you’re in that place, consent simply CANNOT happen — it’s as simple as that. Not conscious? No consent.

If you’re planning on using substances and engaging in sex, keep these things in mind:

At the end of the day though, if you’re not sure your partner is consenting, or is able to consent, it’s time to stop. It doesn’t matter if you’re in the middle of sex or just getting started.